simmons: hey
grif: yeah?
simmons: you ever wonder why we're here?
grif: it's one of life's greatest mysteries, isn't it? why are we here? i mean, are we the product of some cosmic coincidence, or is there really a god watching everything? you know, with a plan for us and stuff. i don't know, man, but it keeps me up at night.
simmons: ...
grif: ...
simmons: what!? i mean why are we out here, in this canyon?
grif: oh. uh... yeah.
simmons: what was all that stuff about god?
grif: uh... hm? nothing.
(red vs. blue 1.1)

welcome to small town gothic, my vanity project about using the tabletop game as a medium to explore the christian apocalypse and its implications. some of you have noticed the thematic and mechanical similarities between STG and the megami tensei series (incl. persona). you're totally right, and let me explain myself.

the political and religious underpinnings of small town gothic

the political situation in the united states is obviously fucked, and in no small part due to the integration of evangelical christianity with the fascist party. it's not a new thing, especially given the existing relationship between colonialism and this perverse brand of christianity. part of the larger fantasy of this religion is the imminent apocalypse where g-d {1} raptures the church and throws the world into tribulation.

the book series--and film franchise starring kirk cameron--left behind by t lahaye and jb jenkins is built on this fantasy. it follows the trials and tribulations (pun intended) of individuals who became christians after the rapture, and how they are persecuted by the antichrist's one world government. i read like two or three of these books in middle school, for better or worse.

although apocalypticism is an undeniable aspect of christianity as such, which we can tell from what has been canonized in the new testament (especially from the gospels and the book of revelation), evangelical apocalypticism is a novel reframing of what is written in the bible to modern political ends. it allows the fascist movement here to phrase its aim and activity in apocalyptic dominionist terms, and it informs many evangelicals' advocacy for israel (the sole purpose is to initiate the apocalypse).

often my partner and i would talk about how there's no one more likely to produce an antichrist than the very evangelical 'church' itself, seeing as how they not only misrepresent the bible to further their ideology, but they are also just deadset on the apocalypse taking place. there is something really perverse and evocative about that, and sometimes when i was bored or listening to music i would write down notes for what the opposite of left behind might look like. maybe a pseudo-christian-led united states really manages to reconstruct the temple in jerusalem and uses the opportunity to desecrate it and cause the apocalypse. maybe the desecration is not the sacrifice of some mutated non-kosher animal {2}, but a human sacrifice like that of isaac {3} or of the christ. maybe someone allows themselves to be sacrificed, to let someone else go free but nevertheless ultimately condemning the world to end.

and that to me, i think, is an interesting consequence that we can apply back to christ: does his sacrifice ultimately condemn the world? did it lead directly to its appropriation by the roman empire, by the european empires, by the american fascists (could any of it have been helped)? keep in mind that this is by no means a condemnation of christianity as such; throughout quarantine these questions became meditation, and i became more absorbed by the gospel.

i think there are, in a sense, two christianities which have always existed (not including any christianity which does not anticipate the end of the world): a christianity which harkens the apocalypse (a voice in the wilderness), and a christianity which seeks to overcome the apocalypse. the former is a gospel proper, perhaps in the sense lacan uses: "the announcement that history is instating another dimension of discourse and opening up the possibility of completely subverting the function of discourse as such" {4}. to clarify, a discourse for lacan is a system of interactions; so a gospel is the announcement of a new world from within the gaps/failures of a previous world. what was the christ's mission if not the gospel?

the second christianity takes the message of the first christianity, and sees the apocalypse as an opportunity to (perhaps) reshape the world in its own image. i am reminded of the roman emperor-to-be constantine who claimed to see the symbol of the cross in the sky, and that this led him to victory against his rival for the title of emperor. constantine would convert to christianity, and christianity would later become the state religion of the roman empire. i am also reminded of the english king henry viii, who founded the church of england to remarry after divorce; this would also change the course of the protestant reformation in europe (which originated because of the rise of early capitalism {5}), now that england became a major supporter. here in the united states, we have been protestant forever and always, and there have been no new gospels but many doctrinal reevaluations of the same protestant gospel: the founding of mormonism in the 1820s, the schism between the northern and southern baptist conventions due to slavery, the right-wing takeover of the southern baptist convention in 1979, etc. it fascinates me how capitalism keeps making new christianities; maybe deleuze & guattari have a point.

anyway! at some point i discovered shin megami tensei, a game series that looked super up my alley (it's about gods and demons) but i couldn't play on any system i had. i decided at one point i might try to make my own taking into account what had been on my mind about modern apocalypticism and the two kinds of christianities. however, i wouldn't have time to before quarantine started and i got back into playing d&d {6} with my friends virtually. oops! so i made an ashcan of small town gothic (link) as a proof-of-concept for how i might handle these themes on a tabletop, and also sort of codifying the way i best like to play d&d. it's changed a lot since then, if you've ever compared the various one-page versions i published on itch. for one, now it's a book.

i've posted old versions of these pages on an itch blog post (link) or elsewhere a while back, but let me show you how they all are now. 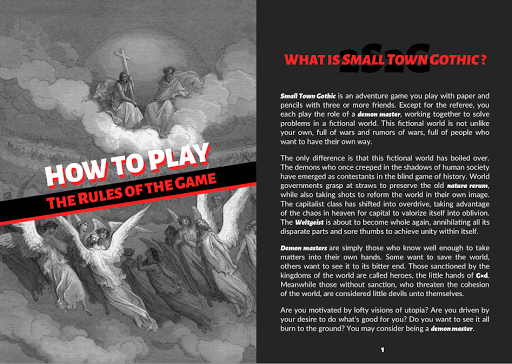 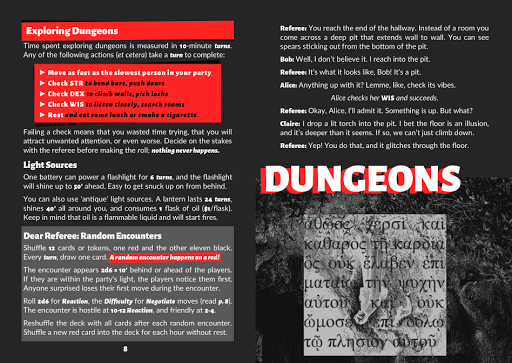 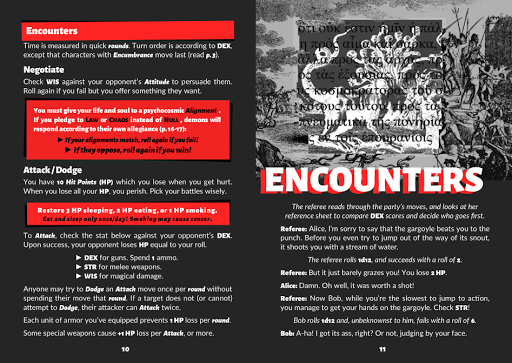 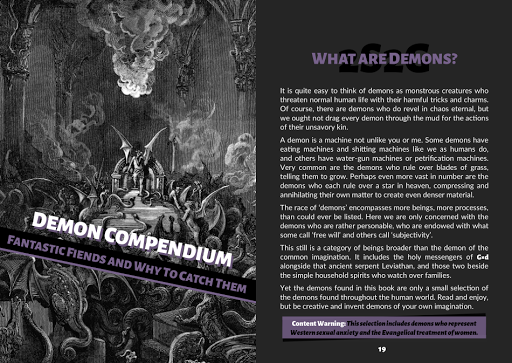 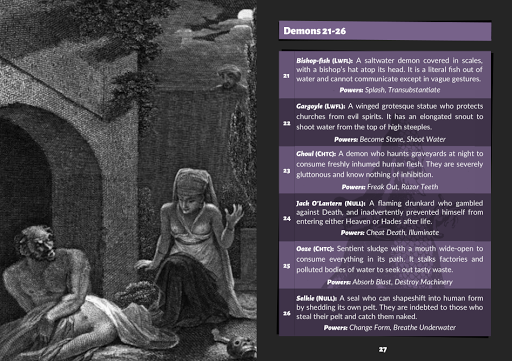 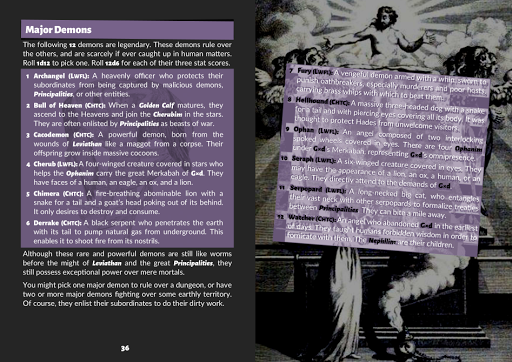 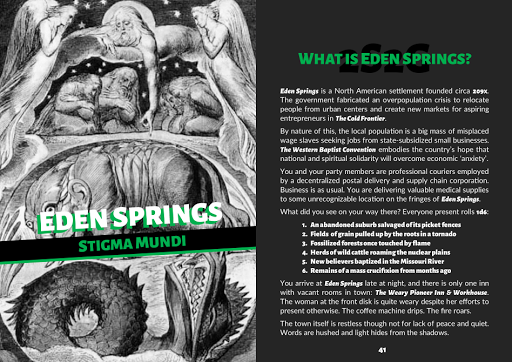 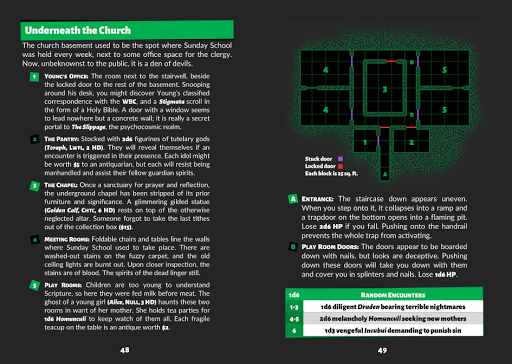 these are all still WIP and untested but i hope you like how these look! the book is becoming lengthy as fuck, but (i think) thankfully not because of an abundance of rules. the next blog post i hope to talk about some of the bigger ~mechanics~ just so you get a feel for how it works; it's nothing unfamiliar, but the goal was to just make enough changes to basic ass d&d to be conductive for the experience i would want to have playing. i hope you like pokemon! or megaten. whichever rocks your boat. i've only played pokemon.

{1} i picked up the habit of censoring g-d in high school because i became sensitive to the idea of offending g-d, even as an atheist (?).

{2} in left behind, the antichrist rides a giant mutated pig into the temple and sacrifices it.

{3} of course, isaac was prevented from being sacrificed.

{4} jacques lacan, seminar xx: on feminine sexuality; the limits of love and knowledge, trans. bruce fink, p. 32-33. in this context, lacan is talking about how marx presents a gospel rather than an 'ontology' (in this sense, an idea of how things should work).

{5} recall john calvin and the notion of the protestant work ethic. there were also conflicts in early protestantism between radical peasants and other factions who were less violently inclined. we can also see how christianity tends to reinvent itself as new modes of society emerge; there are many 'gospels' across history in this sense, many or all of them mutually exclusive. furthermore, these gospels become 'ontologies' (self-preserving worldviews, see above) once those new societies begin to take hold.

{6} this was non-WOTC, OSR-style, frankenstein d&d. i wrote some simple houserules because i didn't want to deal with the 5e shit nor have to walk through how it all works with my friends who hadn't played before (for their sake; what a bloated book). i ended up combining knave with here's some fucking D&D after getting a feel for how they wanted to experience the game.