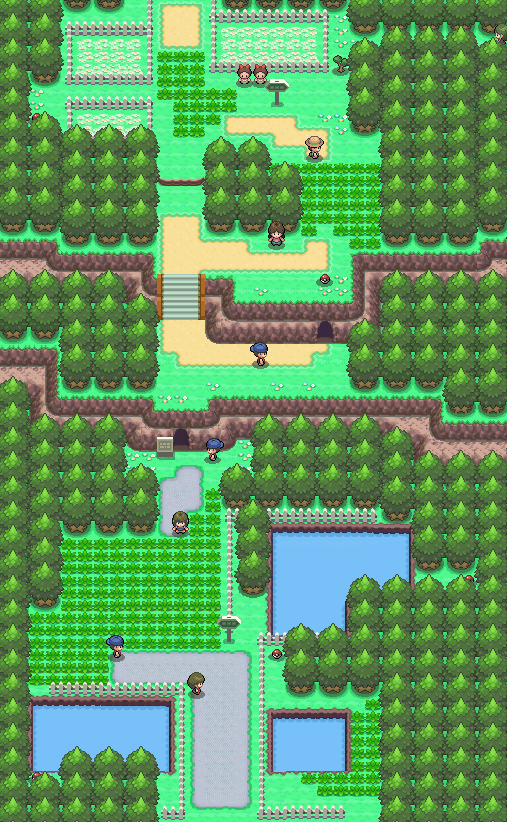 So, this one is going to be short. I pinkie promise!

I was exploring a framework for a Pokemon campaign and thought it would be fun to make use of percentile dice (i.e. d% or d100) for most everything. So, how about percentile dice exploration checks?

My first thought was to keep it simple and say there's a 20% chance of an encounter per turn, since that's a nice round number. It's slightly more frequent than the typical 1-in-6 chance, by about 25%, but that's not the worst.

The nice thing was, I realized, you can combine the roll to check if an encounter is about to happen with the roll to see which encounter takes place. Imagine before that you made your encounter roll at a 20% chance per turn, and then you roll d20 on an encounter table to see what it is. Instead, you can roll at your 20% chance, but then you can use the same roll on that same d20 table. This means when you make your roll, you also know immediately what encounter it is. Isn't that handy!

So, I was exploring different distributions for indices from 01-20. Here's one possible distribution with example encounter types, which I pulled from Nick LS Whelan's blog post on structuring encounter tables [1]. The percentages in parentheses represent the probability of an encounter relative to other encounters, as opposed to the probability that the encounter will occur on the d100 roll.

I don't particularly mind encounter rate being set at 20%, especially if making the check were contingent not on time but maybe instead passing through tall grass. You could even split the table in half between 01-10 and 11-20, expanding the likelihood to 20 in tall grass but only using results up to 10 on usual per-turn checks. Then, on turns not spent passing through tall grass, the chance of there being an encounter is halved. Such a split distribution might look like:

There is also nothing stopping you from using any interval that's a fraction of 100, that is, a percentage. If you wanted to set the chance for an encounter at 16%, to be a rough estimate of the typical 1-in-6 check for wandering monsters, you could use a distribution like the one below (though I don't like it not being a clean 20-out-of-100). Relative probabilities of each encounter are represented as x-in-16, rather than as percentages, since it makes the math cleaner.

By the way, the above is mathematically equivalent to a 2d4 table indexed from 2-8. Isn't that handy? Nick says that that range is too restrictive, but I don't particularly mind it. I also don't really do big locations with lots of possible encounters, so having 7 works just fine for me.

One last aside here is that there's no reason for the distribution of the table to be constrained to try and match the bell curve distributions we're used to. Again, I'm looking at this to use for a Pokemon campaign. What's handy about the random encounter tables for routes in Pokemon games is that they're all already in increments of 5%, which means they port easily to a d20 table but also that bell curves are not necessarily an expectation [2]. What Pokemon does, that I think is more interesting, is that it has three different tables for different times of day. I think that can, potentially, be really fun for overworld exploration, and it's something I'd like to explore more specifically. 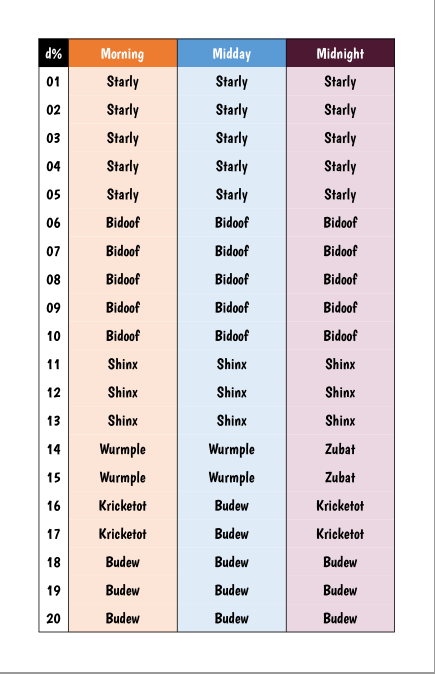 Another method by Ava Islam uses a single 2d6 roll to determine encounter type, surprise, number, and distance [3], which is a lot more of the typical encounter attributes you'd be worrying about for a D&D. However, I don't mind rolling for surprise and ignoring distance, and I've been thinking about hard-coding encounter number for a while. I think the calculations you combine depends a lot on which ones you deem important enough to be their own thing, to be dependent on something else, or to be ignored altogether. With how many rolls you'd typically be making, though, it's worth finding your own way to combine them.

[2] However, each tile of tall grass in Pokemon has a 5% to 10% chance of triggering a random encounter. As it were, Pokemon has separate 'rolls' for encounter checks and encounter determination