Colonialism and Fantasy in Sandbox Games 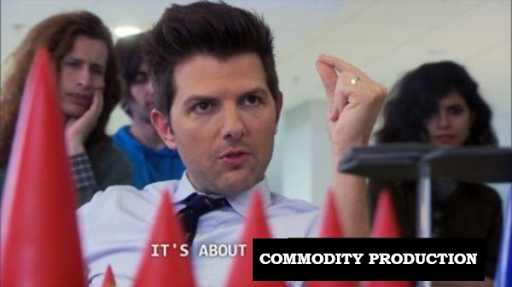 I think there's a good comparison to be made between this topic and D&D: does D&D necessarily present a colonialist fantasy, or does it speak to a broader petite bourgeois fantasy? The answer lies in the text of the game more than its structure because the aim is to scavenge the frontier, bring order to chaos, get some land, become a lord (or lady, as Gygax would [not] have it).

Gold for XP speaks to this, and not just as a vestige of the original Blackmoor game: the bottomless accumulation of gold is the adventurer's drive for jouissance, their plus-de-jouir. This is approached from an extra-fetishistic angle, i.e. gold is considered innately valuable outside of the circulation of commodities, but that doesn't really matter since the adventuristic theft of gold is simply taken as a metaphor for character advancement.

Anyway colonialism (up to a certain level) is a petite bourgeois project, and that becomes more apparent at the structure of the game with the XP system than the game's narrative component. And we can apply that same thinking to sandbox games in general.

What does a colonialist sandbox look like, aside from D&D? We might think of 4X games like Sid Meier's Civilization or Sid Meier's Colonization. Here the colonialist aspirations of the player are encoded (explicitly or implicitly) in the narrative content, and the narrative either embraces this or attempts to rescue the 'fun' parts from the 'problematic' parts. For example, I think there's a 3D ripoff of RimWorld where part of the premise is that the planet is completely uninhabited and you're only using green technology and so on. The narrative simply just imagines itself at a distance from the unfavorable bits of colonialism. Isn't this precisely the same language used by colonial powers to describe themselves and their project?

But we can distinguish colonialist games which attempt to censor their colonialist content from non-colonialist games which nevertheless share the same basic structure of petite bourgeois fantasy? Consider Harvest Moon or Stardew Valley: the premise of either game is that the protagonist abandons the complexity of modern life to cultivate their grandfather's downtrodden farm and to return to a purer way of living. There is not necessarily a colonialist narrative of law conquering chaos and the land being tamed (although given the history behind the charming image of the Americana family farm, this is not strictly absent). Yet we see the same thing which drove European peasants to travel across the sea, and which drove the dispossessed to travel Westward: a desire to possess one's own means of productions and participate in the circulation of capital on one's own terms.