a critical reading of bolt, part 3

last time we finally made it to the hard mechanics of BOLT, now we're going to read about how to create a character and see how far we get from there. although before i've been copying/pasting passages wholesale for the purposes of accessibility, the book is only getting harder to format in a blogger post so i'm going to start taking screenshots.

"characters are largely defined by four sets of values." love me some set theory. let's get into it!

core attributes are defined through two clauses: (a) "some role-playing games would refer to them as 'statistics'," and they (b) "play into a group of Skills." i don't think either of these statements are really helpful to understand what core attributes are. clause (a) relies on you understanding what other games consider 'statistics' to be (and do any games refer to them as 'statistics' and not 'stats' or even 'attributes'?). clause (b) states their functional purpose, to act as a base bonus for what specific skills also give, but it doesn't state that clearly either. a simple "core attributes describe your character's most important abilities" would have worked much better.

the subpoint seems totally contradictory. attributes range from -2 to 5, but gameplay is balanced around 0 to 3, but part of the power fantasy is getting outside of that base range. maybe something like "most characters have stats between 0 and 3, but more powerful characters can break free of these limitations" serves better. the first person perspective also sounds kind of amateur, especially if this is going into a professional book and not just someone's rantings on a blog or a google doc.

i appreciate this point much more than the previous one, since it states clearly what skills are and what they represent. the subpoint is still a little awkward, but it's not the worst. a lot of these issues could just be fixed with some editorial oversight.

now this is just me waxing: i wish pandey had simply called these two categories actions and reactions, especially because the focus is on them being verbs and whether they are actively or reactively triggered. it would do a lot to explain what the game is going for, and perhaps not carry some of the baggage associated with the term 'skills'. this would also help cut down on some of the redundancy between the two points.

this category is fair enough, but i think it should have been introduced right after 'core attributes'.

what follows i think further illustrates my point about BOLT being a sort of heartbreaker, except here we see even more direct 5E reference with the vast list of skills. i'd like to just show the skills listed underneath the knowledge attribute: 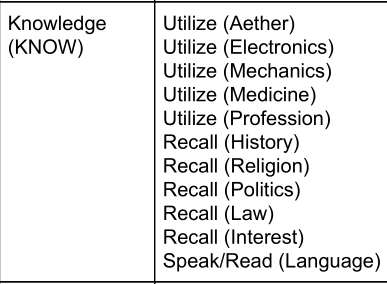 there's all these different skills for utilization and memory-recall, the difference being that one is practical knowledge and the other is basically academic or trivial. i don't know if this is really necessary, much less the listing of all these different types. trying to categorize things like this into numerical "skills" seems unwieldy and difficult. why not, at most, list just "utilize" and "recall" and say that you have to specify which topics you have points in? it's just a lot.

something that irks me is that we don't have any clue as to how "core attributes" are generated, but we are told about how "derived attributes" are generated based on our core attributes. why not just put all this sort of math in the character creation section? everything is all over the place and in an inconvenient order, but at least that way the ordering of things is self-consistent. i shouldn't have to know that vitality = fortitude + 8 ten pages before i know that i can assign 5 points between my core attributes. also, why do some derived attributes add +6 and others +8? just not elegant imo

pandey intends this mechanic as commentary what he feels is a common lived experience of asian children. with all due respect, i don't think this phenomenon is exclusive to asian children or even the children of other diasporas. it just seems like a pretty normal reflection on how much nurture vs nature defines our personalities, and to what extent what we desire has been predetermined by social forces external to us. i guess since my mom's puerto rican and i had the same sort of experience, i'm not one to speak on whether this isn't a diaspora thing in general? the backgrounds themselves have specifically south asian influences, which speak more for themselves than the introductory passage does.

what irks me about this is that the "roles" that follow are decidedly not representative of the player character's role within a party: scholar, scoundrel, soldier, wanderer. these all maybe sound like representative character archetypes within BOLT's intended setting, but they do not at all indicate what role that person plays in a party. to me, a "party role" indicates something like "mapmaker" or "healer" or "quartermaster" or whatever which actually describes that character's role with respect to the other party members or the party composition. the "roles" of BOLT do not do this at all.

there's so much text and i'm getting tired, hope this is a good post to submit to the void. goodbye!