how useful is that big table in chainmail that lets you find your kill chance by comparing weapons to armor? you know, this one:

let's see! first, i replicated the table in excel:

then i switched from scores to hit on 2d6 to % chance.

then, i compared the following categories: 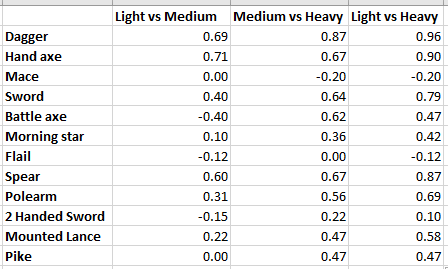 since this table doesn't tell the whole story, since there's the caveat that a shield will either add +0 or +1 to a roll (i don't think there's rhyme or reason to it).

anyway, the most important column is the righthand one because it indicates whether the weapon might ignore armor. the following seem to:

and the following weapons are specifically effective against chainmail:

ignoring the weapons which are especially effective against chainmail, here is the % chance of a blow hitting against a certain type of armor in increments of 5 (for use with d20):

and the % chance of being hit by a weapon without armor, also in increments of 5:

let's get into ways to translate this into a more intuitive system than looking at that awful table. keep in mind that there are some things that won't translate, like how daggers are actually very powerful against unarmored opponents but extremely weak against heavily armored ones, but for the most part this table is just noise with broad trends.

weapons have the following attack values, which is the value to roll below or equal to to land an attack:

weapons must also roll above the following armor values (not equal to):

with rounder numbers for 20-sided die

attack values probably remain the same, but armor classes are as follows:

where shield gives +1 to armor.

perhaps change attack values for the following weapons to be even numbers:

this is more natural lmao, since otherwise we're converting a bell curve to a bunch of increments of 5. this time let's just have ascending armor classes and weapons that give bonuses.

* treat all armor as unarmored
** ignore armor and +1 vs chainmail

keep in mind that some following weapons have a pretty far reach, and that this is essential to playing the game strategically. it might still be worth having a value that indicates this ('weapon class' in the original chainmail), since it doesn't require a table or anything. or even just an indicator that says "this weapon reaches farther than others", but that doesn't account for much relative difference.

finally, maybe we can say melee weapons have four (or five?) attributes when abstracting the table this way:
........
edit: i messed up and didn't include the halberd, but here: