towards a d&d capitalism simulator, part 1/?

the first section of this is going to be a lot of annoying math. if you prefer to just see the outcome of the math as a little thing you could plug into an od&d campaign (or any d&d, whatever), skip to the header following this one!

let's start with the following measurements, which will seem pretty arbitrary but become convenient later:

let's make up some other ones:

now let us count one cohort as 10 individuals instead of 5, such that each cohort is composed of 8 extractors and 2 transporters.

thus 1 cp is the minimum hourly wage per worker, 1 sp is the minimum daily wage, and 1 gp is the daily wage of ten workers. since the workers produce goods in a given time that are worth double the amount it takes to hire them (i.e. 2 gp), 1 gp also becomes the surplus value produced each day.

if the employer ever reaches a scale of hundreds of workers, we can begin phrasing value in terms of platinum where 10 gp = 1 pp. however, the vast number of factories in the modern american economy have less than 100 workers, and very few have more than 1,000, so i don't see this being a common outcome.

since we have a better sense of the math, i will reduce the worth of any common material from being worth 200 cp to being instead worth 110 cp, such that after paying 100 cp of labor, there is 10 cp or 1 sp of surplus value produced. this also means that ten workers can support one freeloader per day provided that the freeloader lives at a minimum standard of living. by hiring double the amount of workers, there will be 2 sp surplus per day. then by hiring 100 workers or 10 cohorts, there will be 1 gp surplus per day.

common materials that can be found just about anywhere are listed below, along with the quantities produced by one cohort per day (each quantity is worth 110 cp or 11 sp; also recall that only 4 out of 5 workers are actually extracting the materials):

we ought to say that the work week is 5 days (M-F), and then that a good local pay period is 2 weeks of 10 days. this way, at a surplus value generation rate of 1 sp per day, there will be 1 gp of value produced per two-week period. hence we can measure individual days' value in terms of sp, and two-week periods in terms of gp, when it comes to the productive capabilities of 10 workers.

let us suppose an individual will take it upon herself to collect and sell soft wood. recall that 1 out of 5 labor hours must be spent transporting material; thus over 100 labor hours over two weeks, only 80 are spent actually accumulating wood. thus the independent producer will really produce as much in two weeks (100 hours, or really 80 productive hours) as ten people will produce in one day (10 hours * 10 people, or really 10 hours * 8 producers). thus for quantities of x producers less than 10, we simply count their independent production at the end of a two-week period as if they were x extra days of labor.

in order to start a business, you must have the upfront capital to hire people and purchase any necessary ingredients or tools. since i haven't covered those other sorts of expenses yet, we can at least figure out the cost of labor. again, one worker costs 1 cp per hour or 1 sp per day; thus ten workers cost 1 gp per day. over a two-week period of ten days, those ten workers cost 10 gp.

bear in mind that after two weeks of production for the materials listed above, you will generate 1100 cp of value, which is 11 gp; thus early on, you will generate (in this very simplistic case) a surplus value of 1 gp per two weeks. if this is your only source of income, you will be living off 1 sp a day, which is the same low standard of living as your employees. if you want to live off of their surplus while not living a shit life, you need to invest more capital upfront and hire more employees at a time.

it might be that this 'rate of exploitation' (as marx calls it) is too low for the commodities listed above. it would be easy to simply change the last digit in the surplus value produced in terms of sp, so that you can multiply the value produced by that digit. for example, if we produced a total value of 12 sp instead of 11 sp, you need only multiply the initial surplus value rate by 2. for 15 sp total instead of 11 sp, you multiply by 5. thus i believe that working with an example rate of 11 sp in total (1 sp in surplus) gives a good foundation with which to figure out other rates of exploitation.

that is a measly amount in the traditional gygaxian economy where the world seems to have suffered a mansa musa-style inflation in the value of gold. thus we ought to take the move where all prices listed, including for experience points, as well as most treasure found in the world, are given in copper rather than in gold. below is a screenshot of the price list from my to-be-released od&d remake, fantastic medieval campaigns: 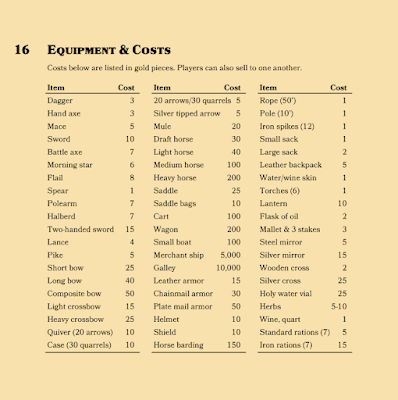 the costs here become much more rational in our supposed economy if we treat them as in copper rather than in gold. a mule costs two days' wages, and it costs 1 gold to purchase a cart (and i suppose that a wagon must be a doubly-valuable cart). it then costs 50 gold to purchase a merchant ship, which is about equal to the surplus value you'll generate over two years (104 weeks = 52 work periods = 52 gp).

then let us take a look at the experience point costs for leveling up as a fighter: 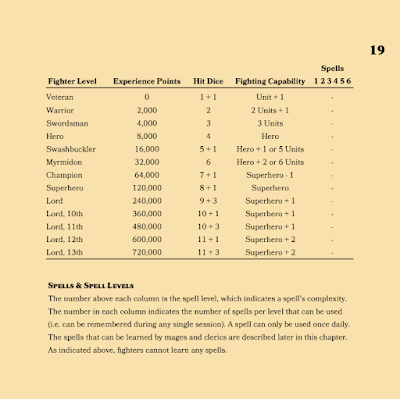 it now takes 20 gold (2,000 copper) to become a level 2 fighter, which is a quantity that a minimum wage laborer can earn over four weeks (20 days) of work. however, i can imagine that such a laborer must spend most of their money on reproducing their own labor-potential by purchasing food and rent among other things. in fact, we can calculate the cost of living by subtracting the cost of two weeks worth of food (5 * 2 cp = 10 cp = 1 sp) from what the worker earns in two weeks (10 sp - 1 sp = 9 sp). perhaps we can glean that it costs 5 sp to rent a home over two weeks, leaving 9 - 5 = 4 sp per period to feed any dependents or to pay for other costs. thus for someone supports only themselves and buys nothing but foot and rent, they can save 20 gp or 200 sp over a period of 200 / 4 = 50 pay periods, or about two years. it'll take 60,000 pay periods to become a lord, or 2,400 years (if we treat a year as having 25 pay periods)! the farthest someone could possibly go over minimum wage is a swordsman at 40 years of minimum wage labor--and bear in mind, they're not spending any of that time dungeoneering, so they won't actually become a swordsman or anything. oops.

bearing this in mind, we can reinterpret the cost of hiring an NPC (100 gp) in terms of copper as well. now it takes 100 cp to hire an NPC for a dungeon. this would correspond directly to 1 gp, as if you were hiring the NPC for two weeks at a time! no wonder that such an employee would not necessarily be loyal if you paid them nothing but the minimum: i'd rather work at mcdonald's than die in a cave if i received the same pay for both things. that is why it makes sense to give them shares of the treasure to ensure that they remain on your side! 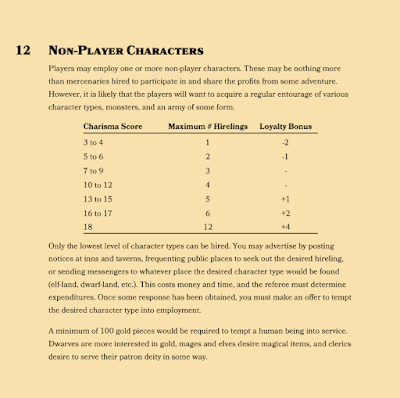 if it's too much work to treat od&d as if everything was copper instead of gold, just treat everything as gold and ignore how i treat the coin denominations above. one person produces 11 gold of value a day, ten people 110 gold a day, ten people 1,100 gold every two weeks. rent would become 50 gold per two weeks, and the minimum wage worker (who is paid 100 gold per two weeks and spends 10 gold on shitty rations) would have 40 gold leftover in that pay period. this isn't bad math by any means, but it can become unwieldy the more zeros you deal with. this is why i advocate for scaling up the value of copper and by extension the other coins, just because it makes the math less of a hassle to deal with.

if i expand upon this, i will have to figure out the cost of constructing (or renting) buildings and purchasing materials and tools for production. that will come later, though! i hope this is interesting :)