This is a record of a rule we improvised while playing You Awaken in a Strange Place [1] by Jacob Andrews of Drawfee fame. If your character finds themselves stricken with a perhaps all-too-natural attraction to an anthropomorphic furry/scaly/feathery person, make a furry saving throw.

Initially, you have a score of 12 against furry attraction. You must roll less than or equal to this score on two dice; however, each attempt (i.e. each encounter with a desire you resist to fulfill) also reduces your score by one. If you fail the save, you will no longer resist whatever your desire leads you to. If you were trying to resist giving into a date proposal, for example, now you cannot resist saying yes.

You can spend a turn trying to “pray the furry away”, and thereby restore your score by one pip.

Obviously, this can apply to other situations besides resisting attraction towards furry folk. Why not have like different scores for each of the seven deadly sins, or something? I don't know.

Instead of starting at 12, you can start each score at 3-18 (3d6). The effect is that those with an initial score of 12 or greater (37.5%) will require multiple temptations to start to break down, while those with lower scores already have a proclivity towards that temptation.

One shouldn't roll when a passive opportunity presents itself, but when the effects of that desire being fulfilled have obvious consequences. There's a difference between eating at a festival, for example, or being in the shoes of the protagonist from Pan's Labyrinth: 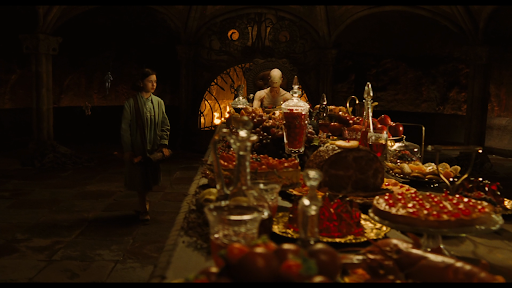 Finally, for longer campaigns, you might limit "praying the furry (or whatever) away" to once a day, or requiring characters to go to confessional to restore their score(s).

That's all I got! I’d like to write a post later about the  game itself because I had a really fun time playing it, largely due to my partner being a wonderful GM and having incredible improv skills. But, I just wanted to write this particular post for future reference.