A Simple Calendar for Timekeeping 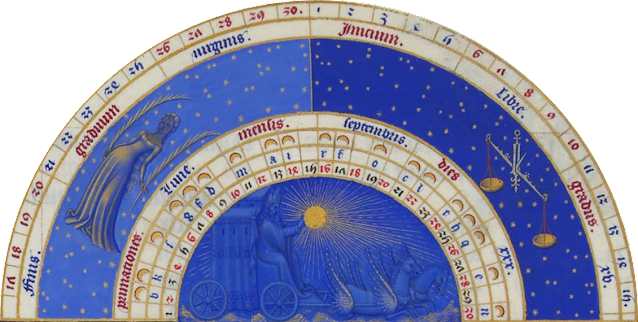 In most campaigns I've played, the passage of time on a larger scale is handled liberally. We tend to see the value in handling smaller scale time via procedure, thinking of exploration in terms of 10 minute chunks for no reason other than to structure the game around those chunks like clockwork (torch duration, monster checks, etc.). The course of the year is not given the same attention, for the obvious reason that it's difficult to keep track of. At first glance, you'd think you'd have to figure out what day of the month it is, how many days are in each specific month, when one month stops and another ends. However, using a simplified calendar like the one I will outline below, you can begin to see months pass and the seasons turn without much additional effort.

The point of this calendar is not to simulate any actual calendar we use in the real world. Real world calendars have the dual function of organizing human life and matching that with what are basically measurements of cosmic phenomena (e.g. the revolution of the Earth around the sun, or the phases of the moon). These two things cannot easily be reconciled, since neither the sun nor the moon operate on a human schedule (hence e.g. leap days), and you’d have worse luck trying to make a calendar to more reliably track both of them.

When making a fantastic fictional calendar, we have the luxury of being able to make the calendar first and the cosmic phenomena it represents second. Why not make a fantasy world where the moon is in sync with the sun, and the cycles of both can be accurately and reliably tracked by human beings using a calendar with nice, even numbers? I am also writing this to help apply my article on Gygax’s post-feudal economy [1] to practice at the table, so I would recommend reading that first.

If you’re a stickler for realism, pick a real world calendar year and use that to track time. You won’t need or want this.

Days of the Week

The day is the atomic unit of the calendar, representing the rotation of the Earth which causes there to be night and day. The week consists of seven days. 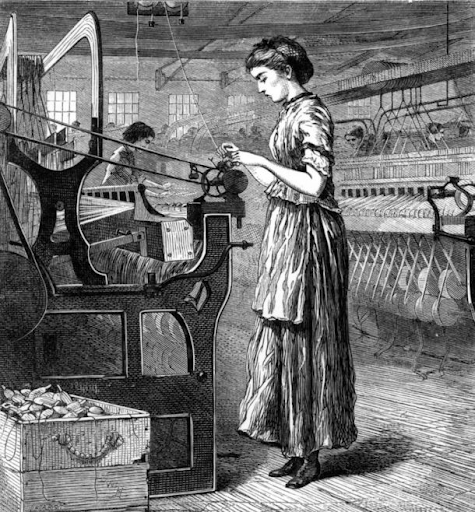 We live in a post-industrial society with the benefit of a five-day work week, i.e. we spend five out of seven days in the week working as opposed to six or even seven. A six-day work week agrees with the hex crawl procedure in D&D (1974) where travelers spend six days traveling and one day resting.

At first glance, a six day work week would complicate trivial time-keeping for a minimum wage of 5 pence a week--what does that mean for daily wages? However, I anticipate the sixth work day as being a helpful illustration of the time for which a laborer basically works pro gratis as per Marx:

That part of the working-day which continues beyond the limits of necessary labor, forms no value for the laborer, but it forms surplus-value for the capitalist. We call that part of the day surplus labor-time, and the labor expended in that time we call surplus-labor. If value in general is only a simple materialization of labor-time, surplus-value is a simple materialization of surplus labor-time. It is realized surplus-labor. [2]

Suppose the working-day consists of 6 hours of necessary labour, and 6 hours of surplus-labour. Then the free labourer gives the capitalist every week 6 x 6 or 36 hours of surplus-labour. It is the same as if he worked 3 days in the week for himself, and 3 days in the week gratis for the capitalist. But this is not evident on the surface. Surplus-labour and necessary labour glide one into the other. I can, therefore, express the same relationship by saying, e.g., that the labourer in every minute works 30 seconds for himself, and 30 for the capitalist, etc. It is otherwise with the corvée. [3]

For example, if a capitalist makes 1 penny of surplus value for every 5 pence spent on labor (a rate of exploitation of 20%), we can represent this as five days of paid five and one day of free labor. Five workers are required for a capitalist to live at the same level of comfort as their employees at this rate, receiving 1 pound in income per year for 5 pounds spent on wages. Twenty employees will thus generate 4 pounds in surplus value, and one hundred employees will generate 20 pounds.

Higher rates of exploitation can be expressed as a ratio of days in the week if you were so inclined, as shown on the table below. However, this is basically just a math exercise in vanity, and it’s easier to abstract rates of exploitation as being multiples of 20% (even if it can’t be squared with a fraction of days in the week—who cares?). For that reason, I have copied my original table of value generation per year, which assumes that the firm hires twenty employees.

I imagine that the discussion above will not be useful except were you to simulate industrial economics in your campaign, which is probably better handled by a computer than on paper. Nevertheless, I hope it's a useful elaboration of the previous post on this particular topic.

This is the point where I am massively simplifying our real world calendar to make things easier on paper. Let each month consist of four weeks, and each year consist of twelve months or forty-eight weeks. This is math for little babies, but it makes some things really intuitive. As I mentioned in my economics article, this makes a minimum wage worker’s annual income easily divisible into weeks since 5 pence times 48 weeks makes 240 pence or 1 pound.

It also synchronizes the cycle of the moon’s phases with the cycle of the Earth on its path around the sun. In the real world, the cycle of the moon has a period of ~29 days, where the period between each major phase is just over 7 days. Reducing the quarter period to a round 7 days, and the total period to 28 days, is therefore not much of a stretch, and it allows us to abstract both lunar and solar phenomena into one made-up calendar where one month represents a moon cycle and one year represents a sun cycle. By extension, the phase of the moon becomes a diegetic shorthand of how far into the month you are, which is valuable for narrating the passage of time to players.

This all first occurred to me when playing Shin Megami Tensei V. I thought, were someone to adapt it to a tabletop game, it would be intuitive to abstract the moon cycle feature into sets of four weeks where each week encompasses one manor lunar phase (new moon, first quarter, full moon, last quarter). Monsters’ temper would thus be a function of the week of the month, being the most volatile on a new moon and the most agreeable on a full moon. So, if you're a Jack Frost fan, maybe this is useful for you?

Having a week-by-week schema for the calendar year also grounds resource management. The original 1974 edition of Dungeons & Dragons locates the week, not the day, as the period of the outdoor exploration cycle (just like one hour is considered the period of the dungeon exploration cycle). Just as the torch then is the resource that guarantees the passing of one such exploration cycle in the dungeon, the weekly ration is the resource that guarantees the passing of one week of outdoor exploration. A week-by-week tracker would help to better conceptualize the week as such a cycle, not to mention as the atomic unit of a campaign as suggested in the same book (my phrasing in Fantastic Medieval Campaigns given below): 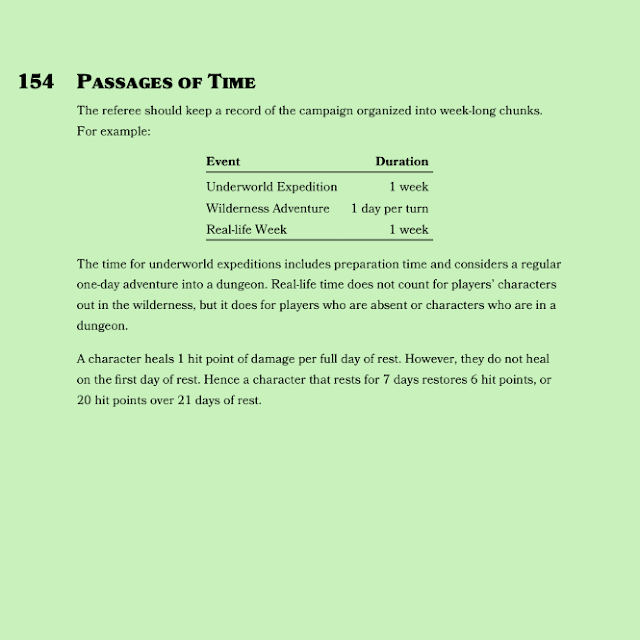 I conceive of this being used in a sort of bullet journal fashion, where you record the happenings of one week under one month with the corresponding moon phase. Using the guidelines above, this comes down to one entry per game session plus one for each additional game-week that passes during the session, and plus one for each real week without a play session.

This also makes it simple to handle downtime periods, where we can assume that one such period takes one week. A default downtime could consist of unskilled day labor, where a character earns 5 pence; besides allowing time for healing (at whichever rate is given, say 1-6 hp a week), this allows players to recuperate early game costs before they have accumulated enough treasure to not have to worry about money. Once a character has money to burn, they can begin to spend their weeks (or months) on things such as spell research or building construction or domain management.

If you wanted to go full goofy gamey, do a Harvest Moon and have just four months a year where each also corresponds to a season. That way, the effects of time are heightened. Just multiply any weekly costs by three if you wanted to keep the same annual costs as before.