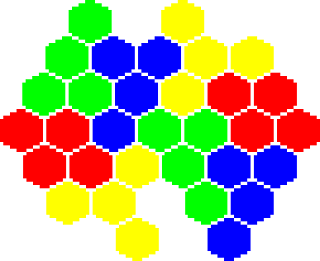 This is something I wanted to isolate from my post about mosaic worlds [1] because I thought it was worth drawing out and expanding upon. In that post, I talk about organizing the world into modules of four hexes. Although it's built on the assumption that each hex takes a baseline of 4 hours to traverse, I discuss an upper level of abstraction where you instead traverse a whole funny-shaped region in 1 day.

This recalls the original hex crawl procedure from OD&D, where a turn is considered as having the duration as one day. The difference is that instead of moving through multiple hexes in one day-turn, you move through one region in one (at a minimum) day. This has the benefit of simplifying the choices you make while making your decisions more meaningful since you can emphasize the various features of the whole region, at least along the vector of travel.

It also massively simplifies the resource management problem, i.e. ration consumption. For hex crawl procedures with time-units of 4-6 hours, you have to keep track of eating food in one of those segments before the day ends. For random/emulative procedures, you become hungry and have to eat at a random segment(s) in the day. I don't really care for this outcome, but that's my own bias against emulative procedures like hazard dice etc. (which I do try, as in the case of TURN [2], to appreciate for its own strengths). Instead, for per-day exploration, you consume just 1 ration per day-turn you travel. If you don't have any rations on you, you better buy food in town or forage along the way.

It's also easily scalable. Like I said in the previous post, unfavorable conditions for travel or difficult terrain can increase the time it takes to traverse a region. I'd imagine, following OD&D again, clear regions take a base of 1 day to traverse; deserts and woods take 2 days; and mountains and swamps take 3 days. You could add 1 day of travel for poor weather, which could be a condition determined for the whole region at the start of the week or month. What each day means is 1 additional ration per person, and 1 additional encounter check made for the party. Easy, simple!

At the end of the post, I give a summary of the basic turn order and examples of actions players might take while traveling. First, though, here is my treatment of fast travel in depth.

Instead of encounter checks, the d6 roll can stand for what time the encounter occurs in a day. The table of results is:

If the party spends 12 hours total resting as they take turns keeping watch (each one trying to attain 8 hours of sleep individually), then half of the results on the table occur when the party is partly asleep. Therefore, we can simplify the above table to say that daytime encounters don't count; we only care about creeps who approach the party in the middle of the night while everyone is sleeping. This means the encounter roll becomes a 50-50 roll, with individual results 4-6 deciding who is asleep and who is keeping watch when the encounter occurs.

I suggest in the original post that the order of keeping watch is basically a parallel of a marching order, since it determines who acts first when the party is faced with a (likely hostile) weirdo. You could call it "sleeping order". Each character needs 8 hours of sleep, so each character is also awake for one of the three night watches. You might want to pair characters who go well together, or who are too weak to keep watch on their own. It introduces interesting decision-making, which is made easier when you decide on a sleeping order ahead of time and only adjust if you want to change it (rather than it being decided from scratch every night, like I've often played).

That being said, in games I've ran, my friends barely have the chance to camp in the wilderness where they would probably have to keep watch. I like being "generous" with finding places for them to sleep, in inns or in protected camping grounds or in people's homes, because I think it's cozy and leads to nice fluffy role-play opportunities. So, for an exploration procedure based on 4-hour turns, that means they always get 16 hours (4 turns) to do stuff instead of 12 hours (3 turns). For a more "zoomed-out" system like this, I think sleeping in town would have the benefit of no encounter rolls, and maybe also some extra HP recovery for nicer and sounder sleep.

There was an argument I started on a Discord server where everyone disagreed about everything: what it means to keep watch (e.g. whoever keeps watch gets less sleep, whoever doesn't watch gets full recovery for the night); or if keeping track of sleep is even necessary (if it's not in the daytime, who cares?); or if abstract turns for exploration should represent equal-length segments of the day or different periods of daylight. It was funny. I say this just to point out I'm sympathetic to anyone who finds the watch-keeping thing extra, but also I think it interfaces really well with the per-day system as an extra point of decision-making. What's nice is that at such a high level of abstraction, it's up to interpretation at which time exactly this or that happens; the abstraction serves interpretation, rather than being a rigid restriction on it.

By the book (i.e. OD&D), there's not much to do in the wilderness besides move around. My own impression is that, if we consider the rules which are structural versus operational, the OD&D procedure is too procedural. Besides deciding what direction to move, there are too few decision points. The party moves around the map like an automaton. Move hexes, check for encounters or getting lost, consume rations. Repeat.

Later rulesets, more from the OSR to my understanding, expand upon wilderness exploration with the 4-hour turn (often called a "watch" even outside of the watch-keeping context) which players can spend doing any sort of action: exploring a hex, foraging for berries, hunting for animals, et cetera. This makes the hex crawl more analogous to the dungeon crawl, which has aspects of worker placement mostly absent from the hex crawl in OD&D [3]. It's a handy solution to reintroduce such decisions into outdoor exploration.

I wouldn't shy away from that solution (and I think that my per-day procedure can exist in the same campaign as the per-4-hour procedure), but I think that there is also a simple solution with this schema. Players can simply declare one task to perform per day, besides traveling. The abstraction allows for situations where characters are doing this as they travel, or at the start/end of the day, or at some point in between; you could even give everyone one chance to "interrupt" travel and do something. The nice thing about the abstraction is that the specifics don't matter and all cases are encompassed.

Following OD&D's lead on dungeon crawls again, and what has already been developed for outdoor tasks, each side task can be handled by a d6 roll. The roll should not be used for binary success or failure, since that can turn out pretty disappointing (especially if either you're spending 4 hours doing it, or this is your major side action for the day). I think instead, for example, foraging should produce 1 or 2 rations; just convert d6 to d2 (maybe if you roll a 1, you get a utility herb alongside the ration). If you have a fishing rod, treat as d3 instead. You can tie these results to region-specific tables, talking about what berries you've found or what fish you've caught. That creates some immersion and interest, especially if they are opportunities for role-play.

Weather is rolled prior to entering a region and it remains for the duration of the traversal (i.e. even across individual turns in the region). It can be a factor in deciding which region to pass through, e.g. should we go through the rainy plains (1 + 1 days) or through the cloudy woods (2 days)?

This is pleasantly simple and less of a headache, at least for myself, than I've found other exploration systems to be. I feel much more comfortable explaining this than I would "So, each day is divided into four-hour chunks, and you can move 1 hex or you can do this or that..." etc. Finally, it also doesn't compromise with player decision-making, which is a risk if you look at only OD&D for slightly more abstract exploration.