Kinetic and Potential Abilities Across D&D and Other Games

In this blog post, I'm going to investigate what I find dissatisfying about the use of ability scores in tabletop games since their functionality was expanded upon between the publications of the original Dungeons & Dragons (1974) and the later editions of the game. Then I’m going to look at some later games from the OSR and post-OSR movements, and how they approach character statistics from a functional and a mathematic angle. This is personally useful to articulate what I want from a rulebook, and how I’d like to play or run games going forward.

The Origin of Ability Scores

I've done nothing but read the 1974 edition of Dungeons & Dragons for months now. This experience has given me a lot of time to reflect on what I like or don't like about the different rulesets I've played with for the last couple of years. I made a post a couple of months ago (link) about the extent to which ability scores, for example, actually affect player experience in OD&D.

Below is a screenshot from Fantastic Medieval Campaigns, my OD&D 'remake' for easy reference, that describes the uses of each ability. Bear in mind that some uses are not described until later in the book, like how many hirelings you can employ based on your charisma score.

You have the traditional six 'categories of ability', but only three have a truly functional use (constitution, dexterity, charisma) whereas the other three only indicate how well your character can perform as a particular character-type (strength, intelligence, wisdom). I will call the first type of ability score “kinetic” since they actively inform the course of the game, and the second type “potential” since they incentivize paths of development but are not actively useful in play.

There is one noteworthy exception, and I figure that this laid the groundwork for how ability scores would become more kinetic across the publication history of D&D. For each point of intelligence you have greater than 10, your character knows one additional language. In other words, for an intelligence score i > 10, the number n of extra languages equals the digit in the ones place (i - 10). That's intuitive! More importantly, it sets the precedent that the three potential scores can have kinetic functionality.

The Evolution of Ability Scores

Below is a screenshot from Old School Essentials, a remake of the 1981 edition (B/X) of Dungeons & Dragons. 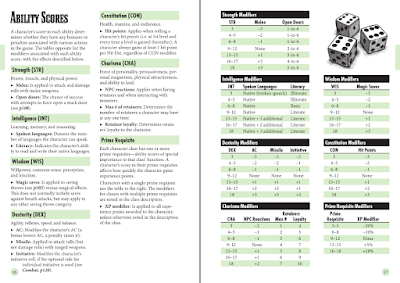 Ability scores matter much more in this version of D&D, such that the bonuses they give for whatever situation are mostly standardized:

You can see that even some of the fields that do not represent bonuses use the same arithmetic anyway. For example, a character can hire a number of retainers equal to 4+bonus, with a loyalty of 7+bonus.

More interestingly, we see that your strength score now modifies both your accuracy and your damage rolls in melee combat. This is something that actually originates from the original Greyhawk supplement (screenshot below), and had been retained in Advanced Dungeons & Dragons (second screenshot below), but by B/X they had been standardized and simplified along the lines I've described above. 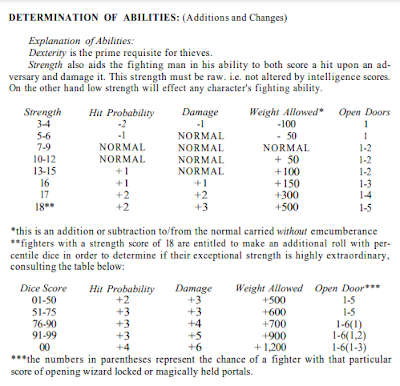 The major point I want to make here is that over time, the role of ability scores in making a character expanded massively since the original publication of D&D [1]. Hence these random factors now play a greater role in one's participation in the game and their enjoyment thereof. Is this desirable?

In Hindsight of Tradition

3d6-in-order vs 4d6-drop-lowest is a philosophical difference. 3d6-in-order isn’t just some hard-mode for D&D-inspired games. It merely reflects a different approach to characters than the more popular 4d6-drop-lowest method. This approach is born from the choice-vs-chance dichotomy. 4d6-drop-lowest allows player choice (while still retaining random chance). The idea is that you don’t have any terrible stats and you get to choose which stats get which scores. 3d6-in-order maximizes random chance. It’s just a product of rolling the dice. 3d6 isn’t, however, “a recipe to play a class not a character.” It is a different relationship between player and character. With 4d6-drop-lowest, the player builds their character. This is ideal for players who come to the table with a character concept in mind. With 3d6-in-order, the player discovers their character. This is ideal for players who get a thrill out of emergent gameplay. [2, link]

For the sake of starting play quickly and for the fun of discovering a character, I also prefer the random generation of character attributes (whether abilities, skills, backgrounds, etc.) on principle. However, I think that the preference for random character generation comes with an attitude that the player must simply deal with whatever detriments result from their random character. So, I will try to show that the use of ability scores, individually and in total, affects the extent to which randomization will impact play. Some games are more cruel than others!

In my earlier post about OD&D that I linked above, I pointed out that the range of average scores occupies 50% of the overall possible range of scores. Thus one might expect that, with six scores, three of them are average and three are not. Interestingly, since there is a 25% chance of a score being above average and the same chance of being below average, one can expect an asymmetric distribution of non-average scores if there are expected to be three of them. Bearing this in mind, and also that three scores are kinetic and the other three are potential, it seems reasonable that the tradeoffs are:

This dynamic is different when all statistics are kinetic. We see this in Greyhawk and subsequent D&D publications where your strength score directly impacts your melee capabilities, and dexterity becomes a prime requisite for thieves. This becomes even more apparent in classless systems, such as Into the Odd with three scores: dexterity, strength, and willpower. In this case, not only are all these scores ‘useful’ such that they directly impact your character’s abilities, but there are only three of them. Hence they are statistically more likely to have an uneven distribution than not, and so they are more likely to be 'unfair'. Knave is also classless, but it has all six of the traditional ability categories. I’d like to point out here that the more random statistics a ruleset has (an six is a fair amount, albeit uneven) the less randomization will impact the character due to average results. Quantity is a cushion.

You might also have four statistics like Errant (link) does, since you can expect two statistics to be average, one to be above average, and one to be below average [3]. However, Errant does something different compared to ITO and Knave by virtue of having character classes that are mapped to character statistics, one-to-one. These statistics are not potential, but kinetic: they do not improve a character's ability to advance, but they improve class-specific features that are used actively. The effect is that if one of your statistics is higher than the others, you'd be unwise not to pick the corresponding class and take advantage of the synergy (although you’d also have to take party composition into account). Getting one score swap introduces player discretion into the process and prevents character generation from becoming too deterministic, in this respect.

One tempting option—if only tempting to me—is to have only potential statistics. None of them would interfere in the course of play, but they would offer direction for how a character might develop or advance. However, as tempting as it is (even if only to me), it might not be as compelling in practice. For one, with there only being potential differences between characters and not any active ones, it might be hard to differentiate characters during the course of the game. Also, along those lines, it becomes more difficult to differentiate characters of the same type without anything active or concrete to set them apart.

All the games above accomplish very different goals with their respective random character statistics, but you can see how they built on top of each other as pastiches of rulebooks past. Were I to make the auteur deluxe elf game of my dreams, I would follow the original schema of OD&D, perhaps with a thief class without an associated prime requisite. Then the thief, with its special abilities, could represent a fallback option for players who have rolled characters with poor potential for advancement otherwise. The tendency for newer rulebooks to shift towards classless characters with kinetic abilities indicates, to me, a desire to make random statistics matter more in the scheme of play.

[1] For strength in particular, I wager that its role was expanded to accommodate the likewise-expanded combat system introduced in Greyhawk that has since become the D&D standard combat system.